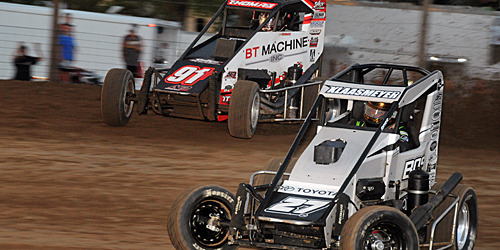 Along with the USAC National Midgets, the JayHusker Non-Wing Micro Sprints will be in action on both nights as well.  The Saturday, July 14, USAC feature offers up boosted feature start money of $500.

Competitors must pre-enter to be eligible for the increased Saturday purse. Pre-entry is good for both nights of the “Midwest Midget Championship.”  Deadline for pre-entering is Tuesday, July 10.  Entry forms are available at https://usacracing.ticketspice.com/2018-midwest-midget-championship-fairbury-nebraska.

The Midwest Midget Championship at Jefferson County Speedway is the focal point of USAC’s Midwest Midget swing that kicks off at Meeker, Oklahoma’s Red Dirt Raceway with “Tuesday Night Thunder” on July 10 before moving on to Solomon Valley Raceway in Beloit, KS, the next night for the “Chad McDaniel Memorial” and then wrapping up at Missouri’s Sweet Springs Motorsports Complex on Sunday night, July 15.

With capacity crowds on hand for the USAC Midget event at Jefferson County Speedway over each of the past two years, even more seating has been added for this year’s extravaganza along with a new sound system.  The always entertaining event will wrap up on both nights with a live band.

Minden, Nevada’s Tanner Thorson reigns as the defending USAC Midget winner at Jefferson County Speedway after battling past Oklahoma’s Tyler Thomas in the closing laps of last year’s feature.  Thomas was runner-up to Arizona’s Chad Boat in the Inaugural USAC Midget event at Jefferson County Speedway in 2016.   Lincoln, Nebraska’s Frank Galusha has topped the JayHusker Non-Wing Micro Sprint ranks over each of the past two years.

The Clauson-Marshall Racing duo of Zeb Wise and Tyler Courtney round out the top five in current points with others among the top ten including Broken Arrow native Brady Bacon, Kevin Thomas, Jr., Justin Grant, Ryan Robinson and Jerry Coons, Jr.

General admission tickets to the event are just $20 for adults each night with children under 54” tall just $5 each night.

A new campground with electric and water hook-ups just a few hundred feet from the track has been added as well.  Limited spots remain.  Contact Monica at 402-300-1281 to reserve your spot now.

More information regarding the event is available at https://www.facebook.com/MidwestMidgetChampionship/ or by calling Cody Brewer at 405-823-8095.