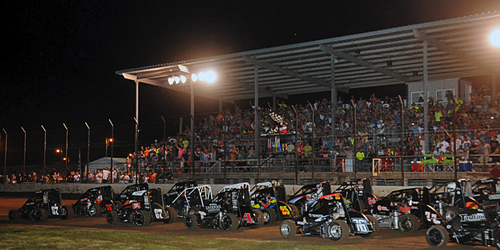 Lonnie Wheatley, FAIRBURY, Neb. (August 1, 2017) – The biggest Midget racing week of the summer is upon us, as it kicks off tonight at Fairbury, Nebraska’s Jefferson County Speedway with some USAC National Midget “Tuesday Night Thunder” atop the racy 1/5-mile clay oval.

The second edition of “Riverside Chevrolet Tuesday Night Thunder at Jefferson County Speedway presented by Westin Packaged Meats and Schmidt’s Sanitation” gets under way with qualifying at 7:00 p.m. and then racing action at 7:30 p.m.

Joining the USAC National Midgets on the card that kicks off four nights of action over the next handful of days will be the JayHusker Non-Wing Micro Sprint Cars.

After a successful inaugural installment of “Tuesday Night Thunder” topped by Arizona native Chad Boat last year, an additional 500 seats have been installed to further accommodate the large crowd expected for the event.

With the first 100 through the gates receiving a free Budweiser koozie, an autograph session will follow at 5:20 p.m. with all the drivers along with cold beer, fireworks and a flyover to further enhance the intense racing action atop the cozy confines of the Jefferson County Speedway clay.

Plenty of tasty food options will be available as well with the Totally Smoked BBQ and Side Trek Bar & Grill vendors on hand.

General admission tickets to the event are just $20 for adults with children ten and under just $5.

More information regarding the event is available at http://www.tuesdaynightthunder.com/ and on Facebook at https://www.facebook.com/TuesdayNightThunder/.