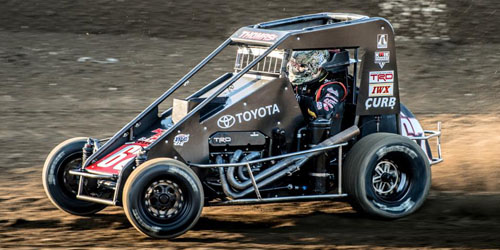 The Wheatley Chronicles – Volume III, No. 30

Lonnie Wheatley, TULSA, Okla. (April 14, 2015) – Darren Hagen and Spencer Bayston may have dominated this past weekend’s headlines, but Tanner Thorson still holds down the top spot in the latest MidgetMadness.com Power Rankings.

The Nevada native posted another podium finish by crossing the stripe third in Saturday’s USAC Midget Kokomo Grand Prix to hold the top spot by 15 points over Kokomo GP winner Hagen, who jumped from 11th to second with the big win.

With Hagen and reigning POWRi Midget champ Zach Daum holding an identical point total, Hagen gets the nod for second with his triumph while Daum still looks for his first win of the year. Daum was third in Friday’s POWRi Battle at Belle-Vegas.

Christopher Bell and Rico Abreu round out the current top five.

After capturing his first career Midget win in Friday’s Battle at Belle-Vegas, Bayston made the jump from 16th to eighth.

After winning Saturday’s POWRi West card at Outlaw Motor Speedway, Matt Sherrell is one position outside of the Top 25 in 26th.

Also picking up a win since the most recent Midget Power Rankings release was Brian Gard, a BCRA victor at Placerville on April 4.

The ARDC Midgets will try to kick off its season once again at Linda’s Speedway in Jonestown, PA, this Friday night before moving on to Path Valley on Saturday with Indiana’s Montpelier Motor Speedway trying for its Midget opener as well on Saturday.

On the Rise (Breaking into the Top 25): Ronnie Gardner, Colten Cottle

Falling Down (Out of the Top 25): Terry Babb, Trey Marcham.

Number of Drivers to Earn Points: 102

Title sponsor of the Midget Power Rankings, www.midgetmadness.com is the leading source of headline news, results and more for Midget racing throughout the world.

A part of the recurring “The Wheatley Chronicles” series of articles on www.sprintcarmania.com, the Open Wheel Power Rankings are determined by cumulative points based on a sliding scale dependent upon car count at Sprint Car and Midget events across all sanctions and non-sanctions throughout North America.

The Wheatley Chronicles brings insight and highlights from all variety of racing series throughout the nation in 2015 and beyond along with the Open Wheel Power Rankings on a regular basis. Please send any comments, questions or advertising inquiries regarding The Wheatley Chronicles at www.sprintcarmania.com to Lonnie Wheatley at lonniewheatley@gmail.com.