Thorson From 12th on Opening Night of Missouri Mid-State Nationals 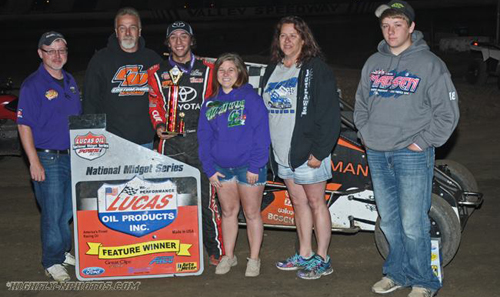 GRAIN VALLEY, Mo. (May 6, 2016) – Tanner Thorson of Minden, Nevada started in the 12th position and stole the 30 lap co-sanctioned Lucas Oil POWRi National Midget Series and Lucas Oil POWRi West Midget Series feature after an intense battle with Keith Kunz/Curb-Agajanian Motorsports teammate, Spencer Bayston. Thorson’s victory credits him with night number one of the Missouri Mid-State Midget Nationals at Valley Speedway, and puts a tally on the board in the National column for the National versus West series friendly battle.

Starting on the pole with Terry Babb to his outside, Spencer Bayston would lead the field to green with a strong start holding Justin Peck at bay.  With two laps in the books, Andrew Deal would bring out the caution just as Zach Daum closed in on Peck.  With Bayston out front, Peck would have to fend off Daum on the restart, succumbing to the 5D machine on lap six.  Two laps later the yellow would fly again as Holly Shelton’s machine sat spun off turn two.  Coming back to green Bayston would lead Daum and Tanner Thorson, already up to the third position by lap eight.  On lap nine, the caution would fly for Austin Brown in the middle of three and four.

By lap nine, Thorson would sneak his Keith Kunz/Curb-Agajanian Motorsports Toyota-powered Bullet past both Daum and Bayston utilizing the bottom side of the ¼ mile Valley Speedway, igniting the duel between teammates that would play out for the rest of the race.  On lap 14, Bayston would work back by Thorson screaming around the top side of the track.  Four laps later, Riley Kreisel slowed on the front stretch directly in front of the leaders, as they closed in on lap traffic.  Thorson, Bayston and Daum would narrowly avoid being involved.

With 18 laps in the books and the field bunched back up, Bayston would continue screaming the top side as Thorson navigated the bottom.  As the two drivers worked their preferred lines, they would come inches from one another at the flag stand every lap with Thorson officially taking the lead on lap 21.  Three laps later the final yellow of the evening would fly as Justin Peck slowed off turn two with a flat tire, setting the field for the final duel between teammates.

Coming back to green, Thorson took back to the bottom side, while Zach Daum setup Spencer Bayston for second.  Diving into turn three and four, Daum took to the high side for the final turn and narrowly sneaked past him at the line for second, by six hundredths.  Tyler Thomas took home fourth, while Tucker Klaasmeyer finished fifth.

“I can’t thank these guys enough,” stated Tanner Thorson.  “Keith, Pete, Big Al, Chuckie, all the guys in the pits.  They work their butts off.  We have five cars out here, so it gets pretty hectic in the pits.  It was getting pretty frustrating to not win a race in so long.  It feels pretty good to win this race.”

“I just couldn’t chalk up like they could on the bottom, especially off three,” explained Zach Daum.  “That was really the only spot I could see they were beating us at.  The cushion went almost off the track in turn four.  It wasn’t terrible, I just hate getting beat by those guys.  We haven’t won a race yet all year.”