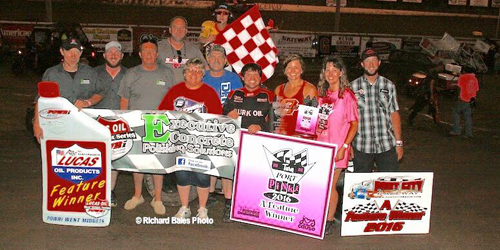 TULSA, Okla. (July 30, 2016) – Early morning showers made for a load of work the track staff of Port City, but the hard work paid off as fans packed the stands and 29 drivers signed in for the Lucas Oil POWRi West midget series presented by Execitive Concrete Polishing Solutions.

A single 15 lap B feature was won by Ty Hulsey.

Kory Schudy would be awarded with the Integrity Customs High Point driver of the night, and after a roll of the dice landed on a one, there was a no invert for the nights A-Feature.

Kory Schudy and Andrew Deal would lead the field to the nights 25 lap A- Feature. Deal would jump out to the early lead while Kevin Bayer and Jonathan Beason would begin to apply pressure. The racing surface was great as there were tight battles thru out the field. As Deal would catch lap traffic, Bayer would set up a slide job to claim the lead but Deal would not go down with out a fight. After a late caution Deal would charge to lead and even a green white checkered wouldn’t be enough for Bayer to get back to the lead. Due to a post race disqualification for a weight infraction Johnathan Beason would be disqualified, moving Matt Sherrell to third with Chance Morthon and Grady Chandler rounding out the top 5.