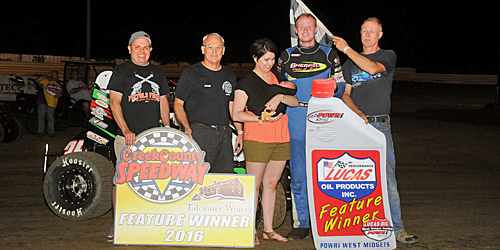 SAPULPA, Okla. (June 3, 2016) – As Mother Nature has played havoc on the Lucas Oil POWRi West schedule the sun finally shined and 24 drivers signed in for competition at Creek County Speedway.

Side by side, three wide, action packed heat races proved drivers were ready to race. Heat race wins would go to Andrew Felker, Blake Edwards, and Alex Sewell. Alex Sewell would be the nights Integrity Customs Hight Point driver of the night and dur…ing intermission would pick Integrity Customs rep Jake Mills to roll the dice for the inversion. With a big roll, the dice landed on 3 inverting your high point man to a second row inside starting spot.

With the field set for the 25 lap A-Feature it would be Matt Sherrell and Blake Edwards pacing the field to green. Sherrell would jump out to an early lead as Edwards and Alex Sewell would try to chase him down. With minimal cautions Sherrell would stay focused hitting his marks lap after lap. While Sherrell led the battle behind him was starting to heat up. A handful of drivers making moves to the front. Johnathan Beason, Andrew Felker and Steven Shebester had joined in a great race with front runners Edwards and Sewell. In the closing laps Felker would fight for the second spot with Edwards and would take over the position with 3 to go. As the checkered flag would fly Sherrell would be your winner with Felker, Edwards, Sewell, and Shebester rounding out the top 5.

Next up for the Lucas Oil POWRi West Midgets
Springfield Raceway June 18, 2016