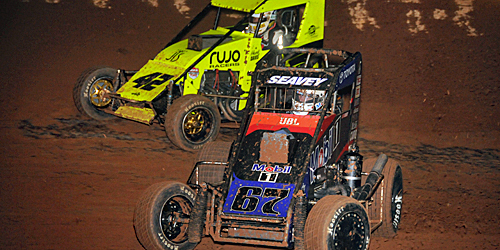 The mighty Midgets will be joined on the Tuesday night card by the NOW600 Non-Wing Micro Sprints.

Along with the stout USAC contingent, a number of top Oklahoma contenders are expected to defend their home turf including two-time USAC Sprint Car champion and Broken Arrow native Brady Bacon, Collinsville’s Tyler Thomas and 16-year-old Cannon McIntosh of Bixby.

General admission for the July 9 USAC National Midget “Tuesday Night Thunder” event is just $25 with high school students and younger just $5.  There is also $5 off admission for anyone wearing a Red Dirt Raceway tee-shirt or that has a “Red Dirt Raceway – Meeker, OK” koozie.  All access pit passes will be available for $35.

Red Dirt Raceway features a tailgate area as well available for the first 25 cars for just $100 per car load (fit as many as you can) with one 54 quart cooler and one grill permitted.

Camping without hookups is available onsite.