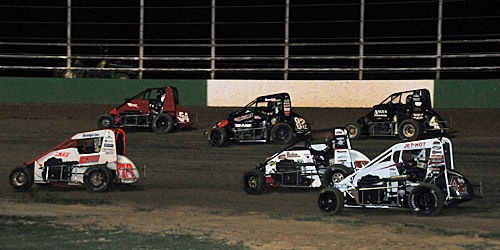 The four-night tour in conjunction with the USAC Southwest Sprint Cars “Freedom Tour” moves on from Lawton Speedway tonight to Creek County Speedway near Tulsa on Thursday, Wichita’s 81 Speedway on Friday and then Dodge City Raceway Park on Saturday night.

Lap money is in play all week with $25 awarded for each feature lap led along the way with contingencies awarded for the top five in Summer Showdown points.  BT Machine is offering up a $50 bonus for each night’s Hard Charger as well.  The week’s champion will also earn a Max Papis International steering wheel.

This is the first time the POWRi West Midgets have joined in on all four nights of the USAC Southwest Sprint Cars “Freedom Tour” after rounding out two nights of competition last year with Kevin Bayer victorious at Creek County Speedway and then Matt Sherrell taking 81 Speedway honors.

Grady Chandler enters the four-race set of events with a slim 20-point lead over Steven Shebester in the series title chase.

More information on the POWRi West Midget series including Summer Showdown and lap sponsor information is available at https://www.facebook.com/PowRiWest/?fref=ts.