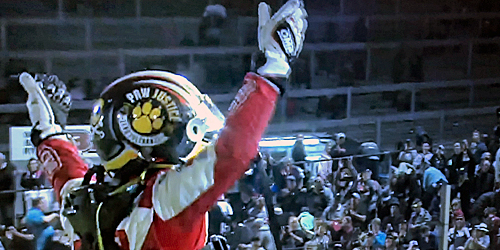 While the eight-time New Zealand champion took the top spot, Zach Daum led the U.S. racers with a runner-up finish while Aussie Kaidon Brown rounded out the podium in third.

Pickens gridded the feature event on the front row but it was Peter Hunnibell breaking out into the early lead.  The duo traded sliders for several laps before Pickens took command at the midway point and then led the rest of the way for the victory.

Pickens withstood one caution with four laps to go and then a last-lap melee that eliminated top-five contenders Tyler Courtney ad Zeb Wise.  Courtney had rallied from the tail of the field after transferring from “B” Main action.

Kyle Larson and Christopher Bell both flipped earlier in the night and did not make into the feature field.

Pickens flashed underneath the checkered flag ahead of Daum and Brown with Max Guilford and Brock Maskovich rounding out the top five.