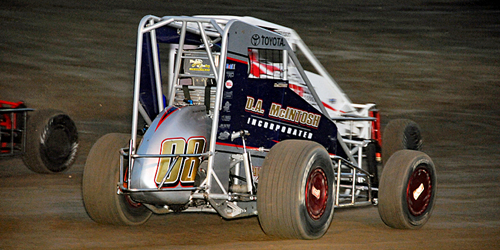 The 16-year-old from Bixby, OK, will get two more opportunities aboard the Dave Mac Motorsports Toyota-TRD Spike No. 08 this weekend as he joins in on USAC action at Tri-City Speedway in Granite City, IL, on Friday and Saturday.

“We’re ready to go and see just how much speed we have against all of those guys,” McIntosh comments.

Speed hasn’t been an issue thus far in 2019 with another pair of strong POWRi runs over the past two runs the latest evidence.

McIntosh raced to a career-best POWRi National finish of second at Lucas Oil Speedway on Saturday, May 4, and then was less than a half-lap away from duplicating that finish at Belle-Clair Speedway last Friday before a turn four incident.

After winning his heat race at Wheatland, Missouri’s Lucas Oil Speedway on May 4, McIntosh gridded the feature field seventh and raced his way into runner-up honors.

“We probably should have won that one,” McIntosh says.  “The track was cowboy up and fast, we just came up a little bit short.”

Starting the feature outside the front row, McIntosh battled for second throughout and held the position only to be collected in the final corner and relegated to a 16th-place finish rather than another podium showing.

“We went back and forth, then on the final lap he just wiped us out,” McIntosh said of the incident.  “We were both going to finish second and third, so it didn’t make much sense for that to happen.”

Showing consistent speed each time out, McIntosh will try to match the mighty USAC ranks this weekend.

Up Next: USAC National Midgets at Tri-City Speedway in Granite City, IL, on Friday and Saturday.  Those unable to watch in person can catch all the action live via PPV at https://www.floracing.com/.