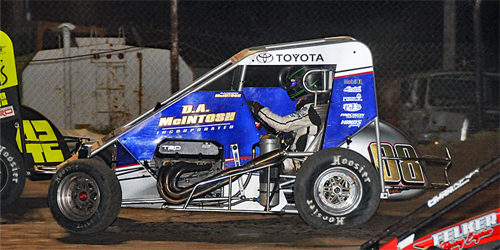 Lonnie Wheatley, BIXBY, Okla. (May 3, 2019) – With rain eliminating Friday night activities, 16-year-old Cannon McIntosh is set for a full night of action at Lucas Oil Speedway in Wheatland, Missouri in both Sprint Car and Midget action on Saturday night.

McIntosh will take in both the ASCS Warrior Region Sprint Car portion of the event as well as the Lucas Oil POWRi National Midget League event aboard the Dave Mac Motorsports Toyota-TRD Spike No. 08.

“It’s going to be fun racing both cars on the same night, I’m looking forward to it,” McIntosh commented.  “We just have to get something going, we need to be able to race and put together some good finishes.”

McIntosh got a head start on that last week with a rousing runner-up finish in POWRi West Midget action at Creek County Speedway in Sapulpa, OK, on Friday night and had secured the fourth starting position in Sunday’s POWRi National Midget feature at Illinois’ Jacksonville Speedway before rain washed out the remainder of the night.

Weather influenced the direction of the team throughout the weekend with an early rainout of Belle-Clair Speedway redirecting McIntosh and company to Creek County Speedway on Friday.  Saturday’s card at Pevely, Missouri’s Federated Auto Parts I-55 Raceway fell victim to rain as well before Jacksonville was cut short.

After earning a hard-fought third-place heat race finish on Friday night at Creek County Speedway, McIntosh gridded the 25-lap feature in the 11th starting position.  McIntosh proved to be the show, working his way forward and contending for the win in the closing laps.

McIntosh briefly slid into the lead in the closing circuits before settling for an impressive runner-up finish.

“I made one mistake on the last lap and that cost us the win,” McIntosh stated afterward.

Following the Saturday rainout, McIntosh made an impressive run from the tail of the field to capture a third-place heat race finish at Jacksonville Speedway on Sunday night.  Set to start the feature outside the second row, rain forced postponement of the main event.

“I wish we could have raced, we had such a good car,” McIntosh commented.  “We’ll just try to carry it over to Lucas Oil Speedway on Saturday.”