Macedo Makes it Two in a Row in Syndey 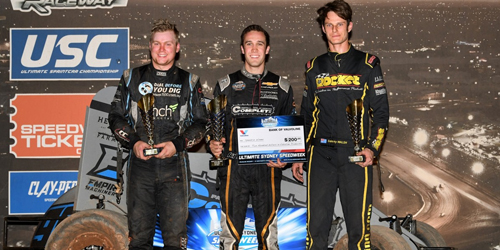 From Valvoline Racewa PR – GRANVILLE, NSW (December 28, 2019) – American Carson Macedo doubled up on his A-Main success tonight in Speedcars on a spectacular but challenging night at Parramatta’s Valvoline Raceway.

Macedo backed up his Speedcar A-Main success on December 14 for the Ultimate Speedway Challenge round with a stirring win over Sam Walsh and Michael Stewart.

Had he won the Sprintcar A-Main also he would have become the only person in the 42-year history of Valvoline Raceway to win ‘double duty’ on two separate occasions.

The Speedcar podium was filled by drivers doing ‘double duty’ in Speedcars and Sprintcars with Sam Walsh impressing all present with a fantastic drive for second in the Brett Morris owned TRD powered King chassis.

Walsh and Macedo traded passes for much of the main as Michael Stewart, Matt Jackson and “Uncle” Nathan Smee and nephew Harley went at it.

Troy Jenkins was a top four proposition as well before a flat left rear tyre on the “Swap n Go” #78 ended his race prematurely.