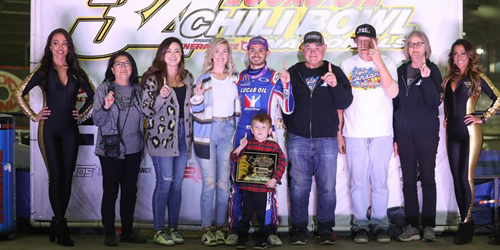 Lonnie Wheatley, TULSA, Okla. (January 14, 2020) – Christopher Bell made his way back to his home state this week as a three-time and defending Lucas Oil Chili Bowl Nationals champion.

And Kyle Larson has been the hottest thing on Midget dirt in recent months after sweeping through USAC’s National Midget swing through California in November and then tacking on some Australian scores as well.

Both dirt experts evolved into NASCAR stars made their statement on Tuesday night at the Tulsa Expo Raceway with Larson racing to a sixth career preliminary victory in wire-to-wire fashion while Bell exemplified that a change to a new team doesn’t mean that he still doesn’t ow the Expo until proven otherwise by besting a revamped Vacuworx International Race of Champions.

Larson, aboard his own Speedway Toyota-powered Lucas Oil/iRacing No. 01 King chassis,  secured a position in Saturday’s 55-lap championship feature along with runner-up Jonathan Beason while Bell is set to make his qualifying effort on Thursday night aboard the Tucker-Boat Motorsports Speedway Toyota-powered iRacing.com No. 84x Spike.

After drawing the pole of the night’s second heat race for the Tuesday night field of 77, Larson won his heat race and then topped his qualifier as well to earn the front row outside starting position with Beason capturing the pole.

Larson gunned into the lead at the outset of the 30-lapper and led throughout, weathering some cautions along the way and surviving a bid from Beason in the late going before the Broken Arrow, Oklahoma racer’s engine soured in the closing rounds.

While cautions kept Larson in clear track much of the way, Beason kept pace and closed in to challenge with the ten laps to go as the duo reached a gaggle of potential lappers.

Larson slipped through and then Beason found himself behind a three-wide battle for deep-in-the back position before a final caution flew with just six laps remaining.

The Elk Grove, CA, native took off from there to take the win while Beason held on for the second lock-in position.

“I wasn’t in a rhythm and wasn’t comfortable on one of those late restarts and about opened the door for him,” Larson commented.

After runner-up honors in the Kantor Motorsports Esslinger-powered Ferguson Superstore No. 8J Spike, Beason explained that, “The motor was going away with just a few laps to go, we were fortunate to make it to the finish.  We’ll have to get to work and get that changed out before Saturday.

Making his first start aboard the Dave Mac Motorsports No. 08 entry, Michael Faccinto emerged from a roller-coaster ride that had as far back as 12th at one point to take the show position while the sport’s fastest announce Dillon Welch slid past New Yorker “Lightning” Larry Wight on the closing lap to capture fourth.

In the 20-lap VIROC event, pole starter Sam Hafertepe, Jr., took command at the outset and led the way ahead of past Chili Bowl champ Damion Gardner, who slid in front momentarily on the seventh round.

Meanwhile, after starting the race in seventh and after pacing himself for several laps, found himself in second moments after Gardner’s turn four venture up against the wall that somehow didn’t result in total calamity with 11 laps in the books.

Bell pounced on ASCS National Tour champ Hafertepe, Jr., on the restart to take command on the 12th circuit and poured it on to win by a full straightaway to take the win ahead of Rico Abreu, who rallied from 14th to snatch runner-up honors away from Hafertepe, Jr., in the final corner.  Son of Sam, Sr., settled for third with quickest-qualifier Larson and C.J. Leary rounding out the top five.

“I’ve been really fortunate to drive good cars here at the Chili Bowl,” Bell said of his Chili Bowl success.  “I was able to throw caution to the wind and go for the win, we don’t have to race until Thursday so there would be time to fix it if anything had happened.”

Heat Moments:  Faccinto held on to win the night’s opening heat despite fueling issues that hindered his turn exits over the final several laps; Austin Shores jumped a tire and flipped in turn two of the second heat with Kenney Johnson depositing a spring in the frontstretch fence soon after, indication of the carnage to follow that pushed the week’s overall flip count from nine on Monday night to 32; Perhaps the wildest of flips was Austin Brown’s launch into the turn one fence from which he was able to return for later action; The first Hawaii competitor in Chili Bowl history went in to the books as Wahiawa’s Larry Petersen  took the night’s first green flag with Kapolei’s Rocky Silva (Heat 5) and Brandon Akau (Heat 9) joining in as well.

Qualifying Race Moments:  In an anomaly, all four Qualifying Race winners doubled up as Heat Race winners as well; Wight earned most spectacular honors with a hard-fought last-lap pass of Frankie Guerrini to win the third qualifier; Fourth-heat winner Hank Davis didn’t fare as well when he had to start scratch when his car wouldn’t fire, an issue that occurred again when he was slated to start fourth in “B” Main action.

“B” Main Moments:  305-ace Bubak begin a memorable charge that fell just short soon after when he rallied through the “A” field only to flip while trying to slide into third; After Aussie Kaidon Brown snared the final transfer from the first “B” Main, fellow rookie contender and Matt Wood Racing teammate Mitchel Moles bested the second “B” before both survived “A” Main chaos to post top-ten finishes; Wyatt Burks climbs from “C” to “B” to “A” by making his way from 11th to third.

1 Lap – Derek Hagar slides to a stop in turn three.

Lap 2 Restart – Guerrini, Decamp and D. Gardner tangle up in turn three before a lap is completed while Webb stops in turn two.  Gardner retires for the evening.

8 Laps – Tyler Thompson (high-point man after the heats) and Schuerenberg find each other in turn one.

10 Laps – A traffic jumble results in a Guerrini spin in four.

13 Laps – Zeb Wise slows with a flat left rear tire and calls it a night.

Lap 15 Restart – Thompson stalls it and doesn’t make a return.  Under the caution, third-runner Mike Hess loses power and crushes many Pool hopes.

24 Laps – After the longest green flag run of the race, Bubak’s amazing rally through the field is interrupted by a turn two encounter with the wall while making a move for third that also collects and ends top-five contender Nick Drake.  Bubak returns for a hearty limp to the finish.

“A” Main Hard Charger:  Kaidon Brown gets it by climbing 14 positions from 23rd to ninth.