More History to be Made at Archerfield this Weekend 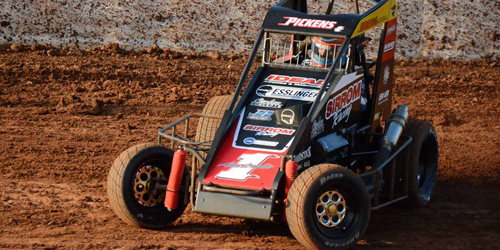 BRISBANE, Australia (January 31, 2017) – For 75 years, Speedcars have been a staple of the Australian speedway landscape and the history and tradition of the category is unparalleled on Australian dirt track ovals. Speedcars, or Midgets as they now more commonly known, have produced some of the greatest drivers in Australian motorsport, including three-time Formula 1 World Champion Jack Brabham, while others such as Johnny Stewart, Ray Revell, Blair Shepherd, Andy McGavin, Len Brock and many more became dirt track superstars in the halcyon days of the sport in the 1960s. To this day, Midget racing has continued to produce some of the finest speedway talent in the country and consistently delivers some the toughest, most intense competition on speedway circuits across the country.

As a truly international formula, the biggest names from overseas have regularly visited Australia to take on our best competitors. From the likes of American stars such as Bob Tattersall, AJ Foyt, Sleepy Tripp, Mel Kenyon, Davey Ray and Bryan Clausen to legendary New Zealander Barry Butterworth, international drivers have been a part of the Australian midget scene since the earliest days of the division and that tradition continues to this day. Furthermore, international drivers have always been welcome to participate in all of the biggest Midget races in Australia and that tradition also continues this weekend when Ausdeck Patios Archerfield Speedway hosts the Kratzmann Caravans 76th Australian Midget Championship. To be staged over two nights of competition (Friday/Saturday, February 3 & 4), the championship weekend has attracted more than 40 drivers from across Australia, New Zealand and the United States in what is shaping as an epic encounter from the very best in the business.

Leading the international charge and having earned the right to pre-race favouritism with three feature race wins already on his Australia tour this season is Californian ace Rico Abreu. Having won all three World Championship events staged at Archerfield and Lismore over the previous two weekends, Abreu is in superb form and the former USAC National Midget champion and two-time Chilli Bowl winner is the man to beat. Joining Abreu in representing the United States will be a quartet of ultra-talented professionals in Alex Bright (2016 ARDC Champion and a three-time podium finisher in this event), Andrew Felker (POWRi Midget Championship winner and runner-up in this event last season), Zac Daum (3-time POWRi champion and winner of the Victorian Midget Championship) and Brady Bacon (winner of more than 50 feature events in various open-wheel categories). As their records attest, each of these drivers bring a wealth of experience and abundant talent in their bid to join the likes of Tattersall, Ray and the seven other Americans who have won the event since it was first staged in 1935.

Last year, New Zealander Michael Pickens created history when he became the first Kiwi to lift the title, winning a thrilling championship finale at Sydney Speedway. Whilst he suffered an engine failure at Archerfield two weeks ago in an unfortunate setback in his bid to defend his title, he will bounce back big time this weekend because he is a world class competitor who has accrued six New Zealand Championships and countless feature race wins in three countries with organisations such as USAC and POWRi. The rest of the New Zealand contingent is also very impressive and includes Brad Mosen, Hayden Williams and Chris Gwilliam. Williams is a three-time track champion at Western Springs Speedway in Auckland and won a 50-lap feature race at Archerfield last season and Mosen is also a New Zealand Championship winner, while Gwilliam has been based at Archerfield this season and has already collected a feature race win in the Polar Ice Track Championship.

If the international line-up looks strong, then the interstate contingent converging on Brisbane for this event is as good as it can possibly be with drivers travelling from New South Wales, Victoria and Western Australia amongst the nominations, including three previous winners in Neville Lance, Nathan Smee and four-time champion Adam Clarke, the man who lost his crown to Pickens last season in the Sydney thriller. Along with Dayne Kingshott and Lee Redmond, Lance is trekking from WA for the event in search of a second title in a career spanning 30+ years, while Clarke and Smee lead an 11-strong NSW contingent into battle. With Travis Mills also trekking north to represent Victoria, more than half of the 42-car field will be from interstate or overseas.

It is perhaps fitting that this most prestigious event has been awarded to Ausdeck Patios Archerfield Speedway this season given that the venue, perhaps more so than any other track, has been a great supporter of Midget racing through the Polar Ice Series, World Championship rounds and other major events, such as the annual 50-lap feature race. As such, local drivers will be desperate to repay that support by bringing the championship trophy to Queensland by outpacing and upstaging the international and interstate drivers invading their territory. Amongst those expected to challenge for championship honours are Troy Ware, Scott Doyle, Brendan Palmer, Darren Vine and former Queensland champion Rusty Whittaker, while rookie Scott Farmer might prove a surprise packet after an excellent performance in the recent World Championship event when he emerged as the best placed of the locals despite his limited experience in the Midget ranks.

Regardless of the outcome, the racing will be red hot over both nights of competition as drivers fight for the right to carry the Australia #1 mantle for the next 12 months. Friday night will comprise time trials and qualifying heats, with Saturday action to include a final brace of qualifying heats, a B Main and the Kratzmann Caravans Championship Feature Race.

Support action on Friday will comprise Lightning Sprints, Modlites and Formula 500 Juniors, with AMCA Nationals, Compact Speedcars, Wingless Sprints and Open Sedans also featuring on Saturday night, along with fireworks and the car crunching craziness of a Demolition Derby. Another American racer in Ty Tilton will be doing double duty over the weekend, competing in Lightning Sprint competition on Friday night before taking on the local Compact Speedcar stars on Saturday.

Gates open at 4.00pm each day (3.30pm for online ticket holders) and early racing gets underway at 4.45pm both nights, with Midget time trials from 5.30pm on Friday. The main program kicks off at 6.00pm and the battle for championship honours will, as it always does, produce some superb Midget competition.

For more information, follow Archerfield Speedway on Facebook or head to the track website at www.brisbanespeedway.com.au for event information and to purchase online tickets to secure early entry.