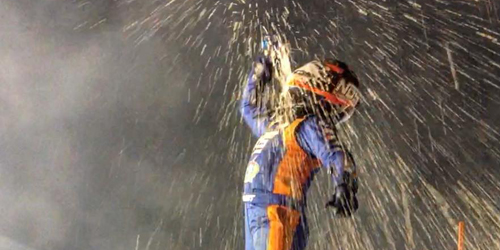 It wasn’t without a struggle though, as Grant had to outduel fellow front row starter and Clauson-Marshall Racing teammate Tyler Courtney much of the way before fending off current series points leader Logan Seavey over the closing rounds to become the series eighth different winner of the year through nine events.

With the triumph, the states to the left coast remain perfect on Nebraska’s Jefferson County soil in USAC Midget competition after Chad Boat topped the initial Fairbury event in 2016 and then Nevada’s Tanner Thorson topped last year’s tilt.  Friday’s scheduled opening round of the Midwest Midget Championship fell victim to rain.

In the accompanying JayHusker Non-Wing Micro Sprint Car feature event, Lincoln’s Frank Galusha scored the victory for a third year in a row.  This time, he had to outlast Locust Grove, Oklahoma’s Daison Pursley, who was gunning for a third win on the week after topping the Red Dirt Raceway card on Tuesday and then the Solomon Valley Raceway event on Wednesday.  After a torrid duel, Galusha beat Pursley to the stripe with Tom Curran, Nathan Berkshire and Jake Galusha rounding out the top five.

In the 40-lap “Midwest Midget Championship” feature event, Courtney led the way to the green flag but it was fellow front row starter Grant jumping out front aboard the CMR NOS Energy Drink/Elk Grove Ford No. 17bc entry.

With Grant leading the way, Kevin Thomas, Jr., worked his way into second from the fourth starting position by the third round, only to have Courtney battle back into position by the 13th circuit.  Courtney closed in and pressed Grant for the lead as the midway point approached with Seavey working his way into third aboard the Keith Kunz Motorsports No. 67.

After a quick red flag for a Zane Hendricks turn four tumble with 26 laps in the books, Seavey battled past Courtney for second by the 30th round and threw the kitchen sink at Grant over the ensuing laps for the lead with the duo swapping the point on lap 35 before one final caution flew when Courtney slid to a stop in turn four.

Retaining the point, Grant got a strong restart to open up a several car-length advantage.  Seavey closed back in with two laps to go, but couldn’t put together the winning combination to steal the win.

Seavey opened the night by establishing a new track record of 10.742 seconds in Qualifying with Bacon, Boat and Thomas, Jr., winning heat races before Maria Cofer edged Petry teammate Coons, Jr., to win the “B” Main.

**Hendricks flipped on lap 27 of the feature.