From Indiana to Illinois – Speedweeks Continue for Cannon McIntosh! 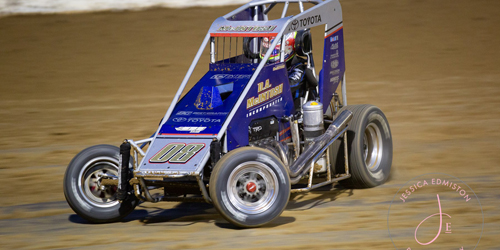 After taking in his first edition of USAC’s Indiana Midget Week, a couple of short days off leads into this week’s Lucas Oil POWRi National Midget League Illinois Speedweek.

With the Wednesday opener falling victim to rain, the remaining four races of the week gets under way at Brownstown’s Fayette County Speedway on Thursday before moving on to Jacksonville Speedway on Friday, Macon Speedway on Saturday and then concluding at Lincoln Speedway on Sunday.

“We came close a couple of times last week, hopefully this week we can get at least one win or two along the way,” the 16-year-old commented.

While McIntosh has raced at all but Macon Speedway, last week was a different experience with the young racer taking on five new racetracks in the Hoosier State before the Sunday finale at Kokomo was rained out.

McIntosh fared well on the new ovals, racing from 21st to 12th in the opening leg at Montpelier and then posting a pair of top five finishes in the final four rounds including a close runner-up finish at Gas City I-69 Speedway and then a fifth-place showing at Lawrenceburg Speedway.

“It was a fun experience, we learned a lot about our strengths and weaknesses,” McIntosh comments.  “We struggled on two nights, but I’m happy with what we did.”

While he posted his best finish of the week at Gas City, McIntosh found Lawrenceburg to his liking perhaps the most.

“The top was a long way around but really fast, and the bottom was good too,” McIntosh says.  “There were two completely different driving styles you could use there, it was fun to race on.”

Of the tracks remaining on this week’s Illinois Speedweek slate, McIntosh has only raced this season at Jacksonville.  On that night, he charged into a prime starting position for the feature event before April showers washed out the feature event.

McIntosh will be looking for victory lane over the next four nights in Illinois.

Those unable to catch the action in person can watch live via PPV at https://www.speedshifttv.com/.