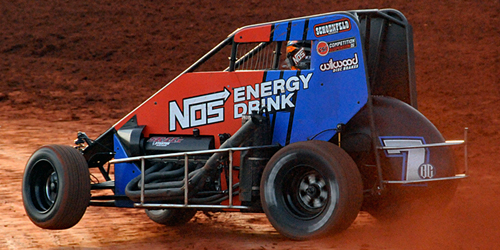 Courtney took advantage of a Kevin Thomas, Jr, miscue on a lap five restart to take command after starting from the pole position and led the frantic final 36 laps aboard the Clauson-Marshall Racing No. 7bc NOS Energy Drink Toyota-powered entry.

It wasn’t without some late drama though, as Thomas, Jr., had one last shot at stealing the win after a final caution that set up a four-lap dash to the stripe.

“I saw someone there racing with me for the win,” Courtney said in victory lane.  “I hadn’t been on the bottom of the track since early in the race so I knew I just had to keep hitting my marks up top.”

While Courtney started from the pole position, it was front row outside starter Thomas, Jr., jumping into the initial lead as Courtney fell back to fourth behind Jerry Coons, Jr., and Tanner Thorson on the opening lap.

Courtney rebounded quickly though by getting back up to second by the time the first of three cautions flew after four laps for 2016 Fairbury winner Chad Boat.  And when Thomas, Jr., stumbled on the turn two cushion on the restart, Courtney took quick advantage and raced into a lead that he wouldn’t relinquish aside from a few backstretch feet on the 38th lap.

A 22-lap green flag stretch had the leaders dicing through traffic much of the way until Brady Bacon came to a stop outside of turn two with 26 laps in the books.  And, by that time, Courtney had three lapped cars separating himself from Thomas, Jr., and reigning series champion Logan Seavey.

Courtney raced away on open track as Thomas, Jr., and Seavey lost ground working lapped traffic.  The advantage was negated when Ethan Mitchell spun to  a stop in turn three with just four laps to go.

Thomas, Jr., challenged on the final restart, edging ahead briefly exiting turn two on the 38th lap.  Courtney continued to rail the topside and made it work for his sixth series win of the year.

“We brought our game tonight,” Courtney explained.  “We have to capitalize on nights like this when we start up front.”

Thomas, Jr., settled for second in the Petry Motorsports No. 5 entry.  “Other than my mistake early in the race, I felt like we had equal cars,” Thomas, Jr., commented.  “I tried to sneak by and it worked until I got in the grease and pushed up.”

Seavey settled for the show position in the Keith Kunz Motorsports Mobil 1 No. 67 Toyota-powered machine.  “Those last ten laps were a lot of fun, this track is always fun to race at,” Seavey said

Seavey set quick time in qualifying for the second night in a row, stopping the clocks this time at 11.412 seconds before racing to a heat race win as well along with T. Thomas and Zeb Wise.