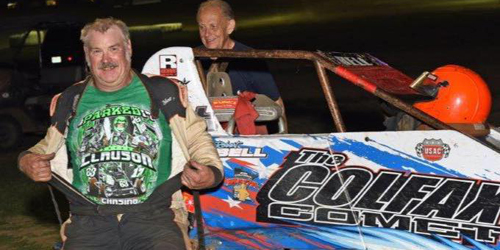 (September 6, 2016) – The Missouri-based Allstar Midget Series put the wraps on the 2016 season with a Labor Day weekend doubleheader at Warrensburg’s Central Missouri Speedway on Saturday and Sunday.

And when the final checkered flag flew, it was Robert Bell capturing the season championship by a mere nine-point margin over Merril Lamb.

While the final two events of the 15-race Allstar Midget campaign were topped by Johnny Murdock on Saturday night and then Don Droud, Jr., in Sunday’s finale, Bell’s pair of fourth place finishes over the weekend were enough for the “Colfax Comet” to come away with the title.

In the series weekend finale, Murdock beat Lamb and Bobby Layne to the line on Friday while Droud, Jr., added his second series win of the year on Sunday in front of Riley Kreisel and Hunter Lane.

The Allstar Midgets offered up eight different winners over the course of the year with Wesley Smith topping the win charts with a handful of victories. Kreisel scored three wins with Droud, Jr., the only other driver to post multiple wins with two. Single wins went to J.D. Black, Lamb, Bell, Kory Schudy and Murdock.

Bell’s championship campaign included a July 9 triumph at Winston, Missouri’s I-35 Speedway among his eight top-fives and 14 top-tens in 15 events.

The series averaged 13.9 cars per event with a high of 21 in the season opener at Valley Speedway on April 2.