Chandler Cashes in at RPM 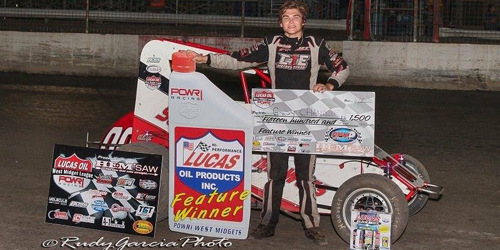 Three heat races would be won by Ace McCarthy, Grady Chandler, and Kory Schudy. The nights Integrity Customs High Point driver of the night would be Kade Taylor, and with a lucky roll of the dice landing on one the field would start heads up.

Kade Taylor and Grady Chandler would pace the field to green for the nights HE&M Saw 25 lap main event, with Taylor getting the early jump.

The initial battle would be with Ace McCarthy and Johnathan Beason as McCarthy would get to the lead point before a caution would fly in turn one for two cars spinning out. Back underway McCarthy and Beason would battle for the 2nd position until the duo would get together ending both of there attempts at victory.

A series of cautions and red flags would see the field dwindle as the action on track was heating up. New comer Alison Slaton would be victim of a vicious flip in turn three bringing out a late red haunting the field.

Back to green rookie contender Matt Moore would begin pressuring race leader Chandler. A series of slide jobs and cross overs provided fans with an absolute thriller as the leaders had a sizable lead over the field. Moore would gain the lead from Chandler and seem to pull away until lap traffic came into play. Chandler would hit the jackpot with a skilled move around the top of Moore and a lap car exiting turn 2 and would go on to win the nights feature.

Moore would finish second with a hard charging Wesley Smith rounding out the podium from 16th with Zane Hendricks and Michelle Decker completing the top 5.