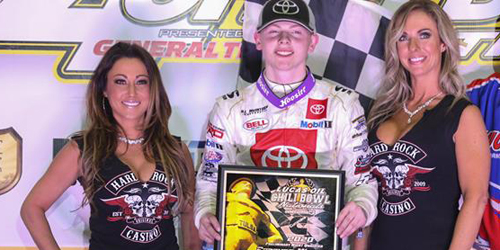 Lonnie Wheatley, TULSA, Okla. (January 13, 2020) – Cannon McIntosh was painfully close to capturing a Golden Driller in Non-Wing Outlaw Micro Sprint competition at last weekend’s Tulsa Shootout at the Tulsa Expo Raceway only to have an engine expire midway through the main event while leading the way.

He may get over that pain in short order after putting himself in prime position to snare the most coveted of Golden Drillers by winning Monday night’s opening preliminary feature event at the 34th Annual Lucas Oil Chili Bowl Nationals atop the indoor, 1/5-mile clay oval.

“The car was amazing all night, I felt like I’ve been driving it forever.  This is just unreal,” McIntosh said after winning his heat race, qualifying race and then leading the way over the final 20 circuits of the 30-lapper.

After breaking onto the Chili Bowl scene at just 16 years of age a short twelve months ago with a top-five finish in preliminary night competition, McIntosh went on to win his first USAC National Midget feature event at the Southern Illinois Center’s “Shamrock Classic” in March and then closed out the year with a runner-up finish to Kyle Larson at California’s famed “Turkey Night Grand Prix” in November.

It was enough to capture the attention of legendary car owner Keith Kunz, who has already collected eight Golden Drillers at the Chili Bowl including the last five in a row and the most previous three with NASCAR star Christopher Bel at the wheel.

McIntosh buckled in for the first time after a quick morning practice session and made it look easy early on, winning his race from third and then wasting little time to rally from sixth to win his qualifying race and earn the pole position for the main event with past USAC Sprint Car champ Tyler Courtney alongside.

McIntosh jumped into the early lead of the feature event and paced the initial four circuits on the low side before reigning All Star Circuit of Champions titlist Aaron Reutzel rallied by on the top side to take command.  McIntosh moved to the top as well to give chase as Reutzel led the way until getting collected by a flipping lapped car on the 11th lap.

Assuming the point that he refused to let slip away, McIntosh endured several cautions the rest of the way and kept the sliding duo of Courtney and Kiwi Michael Pickens at bay the remaining distance despite a late red flag that tested the young gun’s nerves when a portion of the turn two fencing was dismantled by top-five contending Trey Marcham with just eight laps to go.

“I didn’t like that all,” McIntosh laughed.  “I knew those guys would make some changes and have a good shot at us, so I just had to stay calm and keep hitting my marks to stay out front.”

McIntosh had them covered, leading the remaining circuits to secure the win.

All the while, Clute, TX, native Reutzel was on a mission over the final 20 rounds after being collected while leading the race, rallying all the way up to third by the time the checkered flag flew to salvage a superb finish aboard the Tucker-Boat Motorsports PristineAutoAuction.com No. 87 Spike in awe-inspiring fashion.

“I was only going about 70% when I was out front, they weren’t gaining and I knew that I had more if we needed it.  Then there was nowhere to go when that car flipped,” Reutzel says.  “I was mad after that and gave it all it had and I could go anywhere with it.  I want to be excited about passing that many cars, but it’s still hard not to be disappointed with what could have been.”

Pickens settled for fourth at the stripe with Zach Daum rounding out the top five.  Paul Nienhiser battled amongst the top five much of the way before settling for sixth with Kevin Thomas, Jr., 16th-starter Wesley Smith, Chase Briscoe and 21st-starter Kevin Bayer completing the top ten.

Heat Moments:  McIntosh kicked off the 34th Chili Bowl with a heat win from third; Briscoe recovered from a turn three tangle with Anton Hernandez in a battle for second in the second heat (the most significant of heat race incidents) to claim second while Hernandez struggled with mechanical issues the rest of the night.

“C” Main Moments:  After smoking the turn four wall at the start of the night’s second heat, Alex Sewell was edged for the final transfer in the first “C” Main by Claud Estes.

“B” Main Moments:  Bacon shook off effects of a tough draw and a stout qualifying race to transfer while Hall survived a caution-plagued “B” Main that wiped out half the field along the way.

Pre-Green – Carson Garrett is unable to fire and the feature goes green with 23 starters.

10 Laps – Dustin Golobic goes for a tumble in turn one and collects race leader Reutzel and Kevin Bayer as well.  Reutzel and Bayer rejoin the fray.

14 Laps – Ryan Leavitt bounces to a stop against the wall exiting turn four and is done.

19 Laps – Zane Hendricks gets into the wall in turns one and two with Ryan Hall then making contact and taking a tumble.  Both are done for the night.

22 Laps – After working his way from 17th to seventh, Brady Bacon stalls it in turn one.

“A” Main Hard Charger:  Alex Sewell picked up the honors by rallying from 18th to finish seventh.