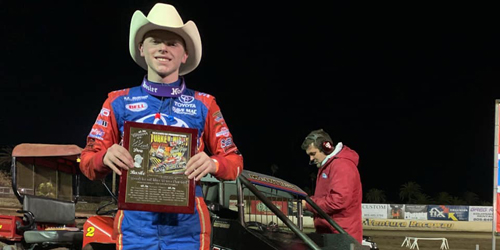 Locking into the feature event with a qualifying time of 12.645 seconds earlier in the night that put him eighth amongst the field of 68, McIntosh wasted little time working forward in the main event.

McIntosh was up to second within the opening 20 laps and took command on a lap 21 restart.  McIntosh controlled the pace for the next 67 circuits before surrendering the point to Larson with just 11 laps to go.

“One of the radius rods on the right rear stripped the threads out of the birdcage,” McIntosh says.

With the radius rod disconnected, tricky track conditions became that much trickier in the closing laps.  “It was making all the bumps twice as violent as they already had been,” McIntosh continues.  “At the time I didn’t think it affected the car all that much.  But after watching video of it, I could see how much it changed up how we were able to get through the corners.  If that hadn’t come off, I don’t think Kyle could have driven by us on the outside like that.”

The runner-up finish marked McIntosh’s eighth overall second-place finish of the season and second in USAC National Midget action to go along with a win in March’s Shamrock Classic.

It wrapped up a California trip that included Placerville Speedway’s Inaugural Hangtown 100 on November 19-20 and then Bakersfield Speedway on November 23.

McIntosh raced his way into the Hangtown 100 preliminary feature amongst a stout field of 57 only to get gathered up in an incident.  “We just got caught up in some other people’s crash,” McIntosh recalls.

In the Wednesday night Hangtown 100 finale, McIntosh was in position for a transfer from “B” Main action before missing it by just two positions.  “We got up to third and then we caught a caution that we didn’t need,” McIntosh explains.

McIntosh secured a position in the November 23 feature at Bakersfield as well only to have the run cut short by a broken break fitting.

With the outdoor portion of McIntosh’s Midget season in the books, the team sets its sights on the Gateway Dirt Nationals at “The Dome at America’s Center” in St. Louis on December 19-21.