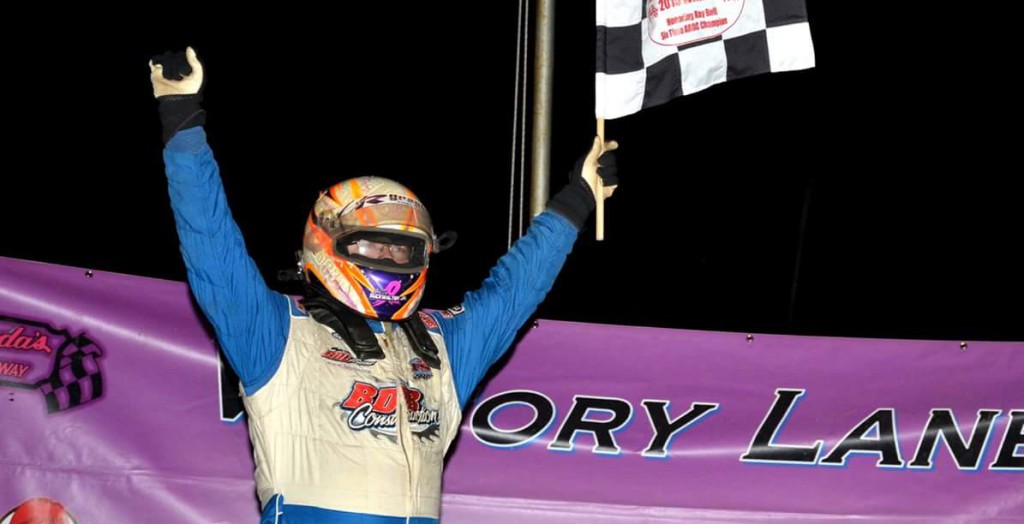 BUCKWALTER PICKS UP THE WIN IN “NO BULL 25″

Bruce Buckwalter, Jr. dominated the 2015 season opener of the American Racing Drivers Club (ARDC) at Linda’s Speedway before mechanical failure had him headed to the pits midway through the feature event.

He returned to Linda’s on Friday night and earned his first win of the 2015 season as Linda’s Speedway and ARDC honored six time ARDC Champion, Ray Bull with the running of the “No Bull 25″. Bull and his family were on hand for the event, visiting with many of his former competitors, both in the midget in micro sprint divisions.

The twenty-five lap main event was action packed from the green flag as three different drivers led before Buckwalter took over on lap fifteen. Brett Wanner jumped out in front at the start and led the first six circuits as fourth place starter, Brett Arndt moved up to second. Arndt had to fend off the challenges of Tony DiMattia as Bruce Buckwalter, Jr. and Trevor Kobylarz completed the top five in the running order with five laps scored.

Arndt challenged Wanner for the lead on laps five and six and then slid out in front to be scored the leader on lap seven. Arndt had the Schneider Recylcing/Sills Campground #46 on a rail as he sailed around Linda’s Speedway. The caution waved for Alex Bright with fourteen laps scored as Bright tangled with a lapped car.

Arndt went back to work as the race returned to green flag conditions but a part failure felled Arndt as he entered turn three before the lap could be completed. Arndt’s stellar run came to an end as second place runner, Danny Stratton, the winner of the opening day event, led the field on the restart.

The lead was just not the place to be as Stratton slowed on the restart on the again the yellow flag waved. Bruce Buckwalter, Jr. became the race leader on the restart and picked up where he left off back in April.

Buckwalter led the way for the final ten laps to pick up his first ever win at Linda’s Speedway. Trevor Kobylarz trailed Buckwalter at the line to finish second. Bright rebounded from his mid-race spin to cross the line in third but was penalized for a restart infraction and placed ninth in the final finish. Current point leader, Steve Drevicki finished third followed by Nick Wean and Tony DiMattia.

A special $100 Hard Charger Award was offered by the Bull Family. Ryan Greth was the race’s Hard Charger, advancing from his twentieth place start to finish sixth at the end of the No Bull 25.

The three qualifying heats were won by Arndt, Wanner and Shawn Jackson. Joining ARDC’s biggest field of the season was AARN’s Miss Motorsports, Shelby Harper who made her first ever start in a midget for the No Bull 25.